Blind
Old man, your eyes
the color of spoiled milk,
every evening we saw you
on the corner under the streetlight,
your hand outstretched, a few coins
sparkling in your upturned palm.
You must have known
the sound of our footsteps,
for one evening as we approached
you reached out and softly
put your hand on my shoulder
and whispered in my ear:
Pity the blind.
It’s beautiful to
be touched so lightly.
But we turned and walked
away—happy, in love.
When we got back
to our apartment I
could still feel your
fingers perched on my
collar-bone like a bird.
Much later, after
she left me for good
I’d go back each night
to the corner where you stood.
I could hear the elevated train rattling, clattering
and the bang of doors
as the shop-keepers locked up for
the night. But you were
never there. Every time
I pass that corner
I wonder where you are now,
old man, your eyes
the color of spoiled milk.
Wherever you are
have pity on me.

A woman lives
in the apartment below me,
but I’ve never seen her.
I hear her at odd hours
stacking boxes or banging pans
and listening to JS Bach
and sometimes
the Fifth Dimension.

She makes beautiful noise downstairs.
I can tell by the way the china clicks
when she’s setting her table
that she has delicate hands
and is graceful.
We might be lovers
if I only had an opportunity
to meet her.

Once I left a note
on her door saying:
If you ever need anything…
Of course, she never called.
I can hear her downstairs now
watching reruns of “Seinfeld.”
I have a TV dinner
in the oven.

We have a nice life together.

One by one
I watch them go in
and file out again.
I overhear their stories—
as if Mr. Stevens could care
about their lives
as much as their typing speeds
and the way they wear their hair.
Their dreams are all so similar
(and so similar to mine)
that even after thirty years
it’s like I’m walking in
with each one of them
each time
and walking out again
drained
of all we held inside.
No wonder they look so empty
when they take
Mr. Steven’s hand
and lie
that it was a pleasure
meeting him.
Then heave a sigh
and disappear
behind the elevator doors
like shells
of what they were before
they made this trip up here.
And they go
down, down, down,
to face the blinding light
of noon in Midtown:
the breathless air,
the strangled sky,
the next, and next, and next guy
with whom
they interview.
It’s how the world’s always been.
At least, thank god,
just one unlucky girl
will have to make this trip upstairs
again.

Jonathan Harrington lives in an 18th century hacienda which he restored himself in rural Yucatan, Mexico where he writes and translates poetry. He was an invited reader at the International Poetry Festival in Havana, Cuba in 2012. A graduate of the University of Iowa Writers’ Workshop, his poems have appeared in Poetry East, The Texas Review,Poetry Ireland Review and many other publications worldwide. He has published four chapbooks: The Traffic of Our Lives (winner of the :Ledge Press, 19th annual chapbook award), Handcuffed to the Jukebox, Aqui/Here (bilingual) and Yesterday, A Long Time Ago. His translation of the Maya poet Feliciano Sánchez Chan´s book, Seven Dreams, appeared this year from New Native Press. In addition to poetry, he has edited an anthology of short stories, authored a collection of essays, and has published five novels. 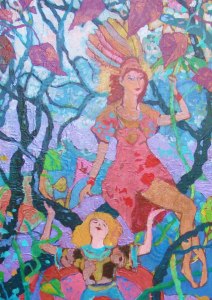 You close the screen door

of the motel room

one last time to the beach.

The smell of salt

lingers in the air

and a cool breeze on your neck

off the long drive home.

The boardwalk is closed for the season

of the slumbering Ferris wheel

shimmers in the wet sand

at the water’s edge.

gulls plunge into the sea.

In the distance you see something.

It must be sea-weed.

Sandpipers race from the foam

leaving the hieroglyphics of their tiny tracks behind.

You’re thinking: What a quiet summer it has been—

when you glimpse a body receding with the tide.

You push your way into the sea.

It sucks at your legs.

Through the smear of salt

you watch the bloated corpse of a woman

rise into view on a crest,

her tangled hair covering her face.

Another gull falls as she disappears.

Straining against the surf, you reach the body.

Her neck is twisted;

You grasp her clammy waist—

of a water death—

and struggle toward shore.

You drag her to the edge of the dunes

and fall panting on the sand.

It is a nightmare

But you know better.

You stare wildly up the beach.

It is still, deserted;

the flawless summer nearly over.

There is still time

to give her back.

I watch them go in

and file out again.

as if Mr. Brown could care

as much as their typing speeds

and the way they wear their hair.

Their dreams are all so similar

(and so similar to mine)

that even after thirty years

with each one of them

and walking out again

of all that’s boxed inside.

No wonder they look so empty

that it was a pleasure

Then heave a sigh

behind the elevator doors

of what they were before

they made this trip up here.

to face the blinding light

of noon in Midtown:

the breathless air, the strangled sky,

It’s how the world’s

At least just one unlucky girl

will have to make this trip upstairs again.

I have almost lost you completely,

can barely remember the curve of your jaw

your nose, your gray hair beneath a cap to ward off the sun.

I remember cigarette smoke, the smell of nicotine on your fingers.

But I cannot rearrange your features to make sense.

You are a puzzle.

I have the nose, blue eyes,

even the sound of your voice.

But I cannot assemble them into a proper face.

Sometimes, coming up from the A train at Columbus Circle,

I see you hunched in an overcoat against the wind

lighting a cigarette in the doorway of a deli on 8th Avenue.

But as I get closer you grow younger,

with a haircut not of your era,

into someone else’s face.

I´m against plants that don´t bloom,

blinking on and off;

I´m against noise and rudeness,

and motors that won´t start,

and wet matches, and slow computers;

I´m totally against wounds and against tears,

against hunger and thirst, insomnia, envy…

“you´re against all those things.

What political party do you support?”

Well, I am a proud one hundred-per-cent supporter,

and a life-long member, of the party of Love.

(written in Spanish by Jonathan Harrington

I remember one bitter winter

waiting with my cousin

for the A train

to carry us over

I looked down the tracks

into the black tunnel

as if looking into hell.

straining to hear the bang

of metal on metal

and the scream of the train

as it bulleted into the station.

I won’t lie to you

on freedom and the City of Brooklyn,

with its rows of tenements,

and piles of dirty snow.

and broke my head open

just as the train shrieked

pulled me back up

and held my broken head

and screamed at me

as the blood ran

all over his lap:

to be writing this poem

Somebody picks at the sores

of her new tattoo.

Somebody stares at the mustache

on a torn poster.

Somebody listens to an Ipod

no one else can hear

her head thrusting back and forth

or a strychnine victim.

Somebody mumbles her rosary.

Somebody reads the Daily News.

A crippled beggar clears his throat.

Somebody studies a book on macroeconomics.

A woman is polishing her wedding ring with a tissue.

Somebody stares blankly at absolutely nothing.

A boy reads the sports section

A coach (whistle around his neck)

plots football strategies on a piece of graph paper.

A man and woman argue.

A little boy scratches his elbow.

Somebody is writing this poem. 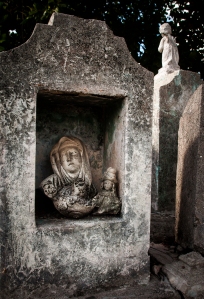 Jonathan Harrington lives in an 18th century hacienda that he restored himself in rural Yucatán, Mexico where he writes and translates poetry from Spanish and Mayan. He is a weekly featured reader at Café Poesia and Café Pendulo in Mérida. He is on the permanent faculty of US Poets in Mexico and a reader for the University of Arkansas Press’ Miller Williams Poetry Prize. He has read poetry throughout the world and has been invited to the International Poetry Festival in Havana, Cuba, Semana Negra in Gijon, Spain and elsewhere. A graduate of the University of Iowa Writers’ Workshop, his poems have appeared in Poetry East, The Texas Review, Main Street Rag, Green River Review, Kentucky Poetry Review, English Journal, Epitaph, Slant, Black Bear Review and many other publications. He has published two chapbooks: Handcuffed to the Jukebox and Aqui. His translations from the Spanish and Mayan have appeared in World Literature Today, Visions International, The Dirty Goat, International Review of Poetry. In addition to poetry, he has edited an anthology of short stories: New Visions: Fiction by Florida Writers, authored a collection of essays, Tropical Son: Essays on the Nature of Florida, and has published five novels, The Death of Cousin Rose, The Second Sorrowful Mystery, A Great Day for Dying, Saint Valentine’s Diamond, and Death on the Southwest Chief.