MY FATHER, THE CONTORTIONIST

My father was a contortionist,

circling his hands until they became the smooth amber steering wheel

He traveled from town to town, bending himself around

a sales pitch for washing machines,

until the whitest shirts rose like genies from that enameled tub.

He hung from a clothesline for a moment, rippling in the breeze

just so customers would see what he meant.

My father was a contortionist, though

there were no sideshows, no gasping audiences:  only him,

along the endless asphalt highways of central Iowa.

At night, in a small motel, he’d disguise himself as

the buzzing neon tubes above the doorway.

Mornings at the cafe, he’d amaze the waitresses by diving

into his coffee cup, doing backstrokes in the brown whirlpool.

When he’d call during those long road trips,

Mom held the phone in her stiff, shaking fingers

as we three kids crowded around her.  We watched him squeeze himself

through a thin black wire and then emerge, large and whole,

right there in our pale green kitchen.

All day his deep voice would keep sounding from

toaster or dishpan or closet, easing our loneliness.

He was a contortionist, the smile on his lips arcing toward the sky

each time the car broke down, each time he lost a job,

each time he slid his body into a small cardboard box

and somehow moved himself

from house to rental house.

P.T. Barnum would have loved him and splashed his image

on a thirty-foot tall billboard:  The Amazing Traveling Salesman.

Watch him spread his body thin and transparent

as a windshield, the barker with a megaphone might call,

Thrill as he reaches out to the horizon and holds it still,

Be amazed as he drives an old car across the entire earth,

proving that it’s flat, then

returns home to circle his thick arms all the way around

a house with a leaning front porch.

Watch as he holds a family steady

for the whole world to see.

And marvel as we hug him back, firmly but gently,

careful not to shatter the glass bones

we always knew were inside.

THE PEN, THE POET, THE MIDDLE

In the middle of my trip across the country,

my car got a flat tire, punctured by a

pen abandoned on the highway.

It was an ordinary blue Bic, but with a sharp point.

Waiting for a tow truck, I thought about how that pen might have

been trying to write something on my tread.

What it wanted to say, I’m not sure.  Maybe Slow

down.  Or else Speed up, you’re going too slowly.

Or perhaps it really didn’t plan to write anything at all.

Perhaps it was simply out of ink, the tip

of its stained mouth closed and silent after scribbling

hundreds of poems, and some wandering writer, traveling west, tossed

it out the window because it couldn’t say

what he or she needed to say.

But it wasn’t out of words.  As I pried it out of my tread,

like a surgeon pulling a bullet from a victim,

the pen snapped in half, and out seeped

a bleeding blue river, a

river that trickled at first, and then flowed,

on the finely-etched lines of my hand.  It seemed to

spell out an important but unreadable

word on my palm,

as if it still had a lot to say,

as if I still had a long ways to drive

with these blue and yearning hands.

Bill Meissner’s first novel, SPIRITS IN THE GRASS, about a small town ballplayer who finds the remains of an ancient Native American burial ground on a baseball field, was published in 2008 by the University of Notre Dame Press and won the Midwest Book Award.  The book is available as an ebook from the UND Press.  Meissner’s two books of short stories are THE ROAD TO COSMOS, [University of Notre Dame Press, 2006] and HITTING INTO THE WIND [Random House/SMU Press, Dzanc Books ebook].

Meissner has also published four books of poems:  AMERICAN COMPASS, [U. of Notre Dame Press], LEARNING TO BREATHE UNDERWATER and THE SLEEPWALKER’S SON [both from Ohio U. Press], and TWIN SONS OF DIFFERENT MIRRORS [Milkweed Editions].

He is director of creative writing at St. Cloud State University in Minnesota.  His web page is:  http://web.stcloudstate.edu/wjmeissner/ 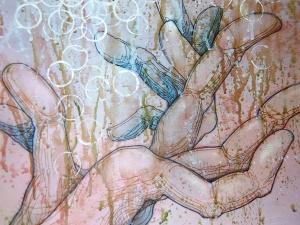