The soup always comes out and steams my friend’s glasses.
Intricately painted bowls and tiny saucers of basil and peppers
are simple planets we orbit as the slurp of our spoons halt all talk.
This isn’t an intricate planet, but a nightmare god walked out of without
waking from. My friend thinks that’s why he never answers.
I add Sriracha and fish sauce to the broth, as the broken English of
our old waitress stares across the counter. She knows each week we
arrive to watch the tendons and tripe float around like our own organs
in the broth. We’re dressed like dirty laundry,
covered in textbooks and grading sheets,
rubrics on what qualifies for passing.

from the nunnery I slept in for two bitter winters.
We would crush PBR cans and launch them past

Victorian chandeliers coated in minimum wage
and regret above the theatre that housed countless runaways,

hobos, and hookers who slept with bruises.
When the woman on fire knew everyone

was putting her out I watched the houses rot
like out of season farmers markets. The weeds grew

in the parking lot as she claimed to understand Icarus.
You can still see the crack looking down from the east wing.

pieces of the sky as a joint is passed
around the outdoor fryer.

in between clinking glasses of red wine
spilling on the unworried carpet.

The sixteen year old boys dreamed of girls
and paychecks from the paperbag grocery store.
Casting lures out into the black, the splash just the sound
connecting them to the lake. The fish were out there
listening to their blood run its course, their questioning of
how to find big water as fireflies sought the right connection
to continue living. Eventually the fish pulled the line,
forcing them to pull back against their own tensions.
Shirtless on the rocky bank, seeing the night come undone,
holding the fish by the jaw. They didn’t imagine
what it meant to grab life and drag it home. 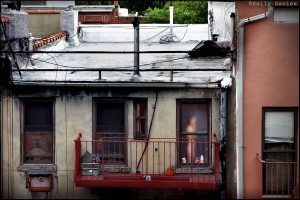 in the carpet I

Today I fell in love with the

postcard from your holiday,

the one where you never returned,

disposal from the hanging

drunk from the same

from hands that have

yet this scarred cup

knows that first you

have to have nothing in order

to hold anything at all.

Some nights a man wants

to split his breastbone

a heart sensibly wrung enough to

top the sponge of

locked away from boy scout camp,

or a bus ticket

in the dirty book forgotten

at the station the day

Everyone is a limp dick

There’s a dog spread across I-64

by a Mac Truck as

heading north to the Great Lakes

my mind wanders along the lines,

desperate for romance between coffee breaks and

Aligning to the left lane,

a piece of you sent out the window,

to do but pussy.

Rise Up, a Man Rooted

found in a cork tree.

Peat of Irish tea and

Memories the echoing of

Zach Fishel is a Pushcart Nominee and the Univ. of Toledo Press Fellow. His work has appeared in numerous journals and he hopes to move west for a PhD in American Modernism with a focus in Environmental Studies.  He also co-edits poetry for Red Fez .

Christmas in the Flower Shop

There’s moon
shining from the
flower shop
windows.
Poinsettias reaching
outward with their
fiery poison,
the noise of car horns
celebrating the good
night that’s
everywhere in these
mountains.
Collecting snow on window
sills with cold lucky
quarters. Roasted
pork shoulder
waiting for the family
to pull in the drive,
snow covering the tracks,
as if people never
left or got older.

Learning to be a Man

After the pig fat congealed
in the cast-iron
skillet I’d run behind the
outhouse for the rusty
Folgers can with
my great grandfather’s
clove cigarettes
and brandy flask.
We’d sit and watch the snow
stirring next to the woodstove with fried
eggs and cold bacon
as we waited to
strop the blades to butcher
what the woods allowed us to keep.

Divinity is better left to broken
children as the caterwaul
of busted rusting bell
knockers falling from the
belfry into hell
rattle the cages just enough
for a small drop of rain
to sizzle on the ground.
Yet we’re inundated with
vapidity insomuch as to
say drowned,
the way it stutters
still as a kite forgotten in a garage
the day someone sang a dirge of sound.

against long distances,
fitting as a belt

made of shoe
string.

as the
mornings turned to

as if there was a fucking
difference.

Zach Fishel is a two time Pushcart Nominee and the Univ. of Toledo Press Fellow. His work has appeared in multiple print and online
journals and NightBallet Press is releasing his first chapbook, “Prayerbook Bouquet” in Early June of 2013.

How to Dance in a Bad Time

Japanese beetles fray sunflower stems
like pigtails on old skeletons.
This dancing can’t continue
without whiskey and fly fishing
in storm clouds that remember the words
we spoke on television to people throwing up
under heat lamps because of bad menus.
Leaving tips on dirty napkins for harder loves
than our own collect in the loneliness
hall of fame at the corner table of collateral damage.
She was an Elephants swinging at her own knees
for prayers sake. He counted road kill,
mumbling the steps to unwieldy
acquaintances with much suffering.
My closet is empty except for the shoes
And these leaves are chewn to pieces
Scattered across the wind like noiseless
Traffic on a rainy day.

Time has left its mark
like a battered wife. The court costs
are too            much to handle
suitcases while turtles slow down violently.
Dandelions in July make a
snowstorm of all this fluff as cement
cracks at the dollar general
where women with bad teeth scream
at ugly children lifting lipstick.
Sister’s turning prettier than
dead willows that won’t stop swinging
where
trees can still sing. Appalachia
is beards and baldness
growing into love until I like
things enough to                   continue.
Cliffs hike the sunset and
my ears are forests counting
the stretch marks of flat moons
as a tall Jewish woman carries shapes
in her
eyes and
lets everyone drink cheap
until two (on the porch only).
Hammocks roll over ashtrays.
Marijuana for the pigs playing accordion in the wind
some like the dog days cooling down.
It would be easier to work a solid week,
vacation once a year to an ocean
town like everybody else,
but who would account for this beauty?
Where would the clouds come sit?
Is there even a question                  (there’s always some)
left to the boys grown too old
to do anything but sit
inside single bedroom
apartments waiting to be drunk again?
Fleas stay desperate. The lonely dig
scabs just to taste some        body.
Sisters turning prettier,
playing desperately in the marching band
at a DUI checkpoint.

The only thing from the forgotten house
is a broken alarm clock stuck at 9:13.
It was the last thing standing as
the rusted porch swing
laid with the angry sunrise.

You used to mention how fields caught fire
when nobody was hunting. I became a fisherman.
Double shifts and dirty fingernails
taught me to dress a trout and put
it on the camp stove as whip-poor-wheels
would tell the story of old ghost dances
and fallen buffalo.

Pheasants dot the daylight.
Curveballs and crickets were
the comfort of diamonds run
in the backyards of forever
as the summer tired of radios
and the smell of cheap charcoal.

Driving through Pennsylvania in the snow,
your face melting the make-up
as little flakes smeared
into the local polka station,
taking each turn with two cans of beer
tucked between your legs.

To keep on
keeping on out of spite
and wearing thin the seams
of soldering.
A shatter of windshields.

withered and waiting,
a gardener finishing the harvest
of unsteady scarecrows.
The crescent of your arms
around me as a child,
the reality of pipe wrenches.

I remember the only summer I was twelve,
pitching a one hitter and sitting
in the same truck that provided a comate,
nearly perfect but missing the point.
Repeating stories on yellowed post-its.

We listen to routine punch
itself in place like a panicked festival.
This restlessness against the grasses
sending dandelions off to die quiet as batteries.

There’s only one photo of your grin,
my brother and I clinging
to your Atlian shoulders,
afraid of the Chesapeake’s hot sand.
The edges sun-aged and eating the sailor,
those singing waves are not a dirge.

Zach Fishel‘s poetry has appeared in numerous journals, and received two Pushcart Nominations. His latest chapbook, “Thorn bushes and Fishhooks” will be out later this year via Night Ballet Press.